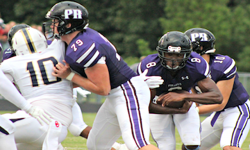 It was a tale of two games between Cuthbertson and Porter Ridge as they met in the season-opener on Friday night.

Porter Ridge recovered a fumble on the first play from scrimmage and scored a  touchdown a few plays later.

Offensively, Cuthbertson struggled, and the Porter Ridge offense took advantage of great field position in the first half along with a Jacob Leath 56-yard punt return for a TD to build a 20-0 lead at halftime.

Five minutes into the halftime break, the sky opened up with the downpour continuing midway thru the third quarter.

I’m certain it was halftime adjustments and probably a little impact from the monsoon, but whatever it was, Cuthbertson came to play in the second half.

Cuthbertson quarterback Davis Walker (11-32, 113 yds) who rebounded from a slow early start, passed for three touchdowns in the second half.

Honestly, Walker would have had a bigger night if not for Jake Horstkamp (5-10, 150).  The Porter Ridge defensive back broke up four passes in the game, three of which most likely would have ended up as a touchdown.

Defensively, the Cavaliers were to firing off the ball, tackling better and applying better pressure on the ball handlers. Senior defensive end, Carter Kendall had two sacks.

In the final three minutes, Cuthbertson had a chance to tie, trailing 27-20, but Walker’s 4th down pass was incomplete.

Offensively, the Cavaliers Myles Wallace led all rushers in the game with 98 yards on 25 carries.

Grayson McCall,  the Porter Ridge quarterback, finished the day 8-for-10 for 125 yards and one touchdown.

Leath was extremely productive for a kid who hasn’t played football since his sophomore year. The senior wideouts totals were impressive; five catches for 111 yards, 213 all-purpose yards, and two touchdowns.