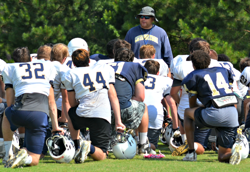 It will be a season of change for head coach David Johnson and his 2017 Cuthbertson Cavaliers.

In Johnson's first four years, the Cavaliers built their reputation on their offensive prowess. This season the team will rely on a defense that returns nine of 11 starters from last year.

Kendall, a defensive lineman, finished with ten sacks in 2016, ranking him among the county leaders.

As a sophomore, Sepe had a laser focus on the ball carrier. The defensive back wrapped up 143 total tackles placing him in the top five in the county.

Junior quarterback Davis Walker (6-4, 200) will lead the team on offense.

Coach Johnson discusses his team and upcoming season below.