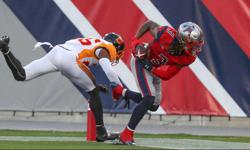 Sam Mobley (Parkwood '14) made his XFL debut yesterday with the Houston Roughnecks and scored a touchdown.

Mobley graduated from Catawba College in 2018 and has since been pursuing a professional football career.

In early 2019, Sam landed with Salt Lake City Stallions of the Alliance of American Football.  Unfortunately, in April, the AAF suspended operations with two weeks left in the regular season.

Undaunted, Mobley set his sights on the new XFL and was drafted by the Houston Roughnecks franchise in October.

Fast forward four months to the Roughnecks' first game on Saturday, a home matchup against the LA Wildcats, and Mobley made his mark, scoring his first professional touchdown. A well deserved big night for the Roughedge native.