On the eve of the 3AA State Championship Game, let's take a look at the matchup between our Weddington Warriors (15-0) and the Lee County Yellow Jackets (15-0).

As you see in their records, both teams are undefeated, two powerhouses meeting at 7:00 PM tomorrow on the field at Carter-Finley Stadium.

Are they evenly matched?

Wins and losses, yes, and the team stats below will confirm much the same. Both teams are roughly scoring an equal amount of points per game, 42 .6 for Lee County, 44.7 for Weddington.

As was the case during the whole season, the point of separation can be found on defense, specifically Weddington's defense.

The Warriors' defense is yielding only six points per game and has dealt the opposition six shutouts during the season. The players on this side of the ball for Weddington are fast, football smart, and rarely get caught out of position. The Warriors will field the best defensive unit the Lee County offense has seen all year and probably the best they have seen in their school's history.

Lee County is giving up an impressive 11.5 points per game, thanks to a defensive line anchored by two D-1 commits.

Senior Desmond Evans  (6-foot-6, 245-pounds) has verbally committed to UNC and fellow senior Deandre Dingle-Prince (6-foot-3, 253-pounds) to APP State. The two players have combined for over 160 tackles and 23 sacks.

The Jackets are the best defensive squad on paper Weddington has faced all year, but they will get a workout tomorrow for sure.

Lee County's offense is more similar to Northwest Cabarrus in terms of balance, and we know had that ended. Weddington hammered NW Cabarrus, 49-7.

The Yellow Jackets don't have a running threat from the quarterback position like Watauga had in Anderson Castle. Don't get me wrong; the Lee County quarterback (Colin Johnson) looks good, but he doesn't pose a significant rushing threat, so that's one less worry for the Weddington defense.

The main cog for the Lee County offense is their senior running back AJ Boulware. Boulware (5-foot-10, 193-pounds) rushes for 151 yards per game. They will need to run the ball to be successful.

As far as the Weddington's offense is concerned, we all know it runs through Will Shipley. He will face a test tomorrow in the Lee County D-line, but so will the Weddington offensive line, a tough group that has been together all season. They are fast, technical, and have met and exceeded every challenge, as seen in Shipley's numbers all season long.

Based on the numbers below and the few items I outlined above, I have Weddington defending their title, winning their third state championship in four years by a score of 38-13. 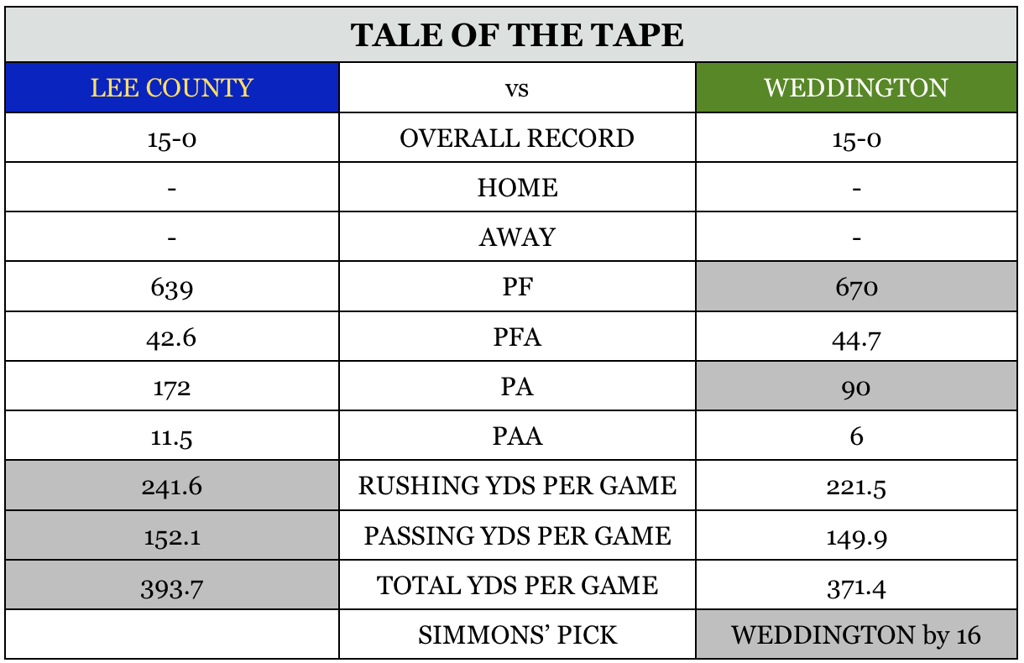