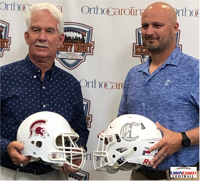 The high school football season will kickoff at 5:00 PM on August 22 when Sun Valley takes on Charlotte Christian in the 7th annual Charlotte Kickoff Classic. Hough and Butler will round out the doubleheader at 8:00 PM.

The Kickoff Classic will move venues this year from Charlotte’s Memorial Stadium to Matthews SportsPlex, the current home of the Charlotte Independence. The stadium has a capacity of 5,000-seats thanks to the recent addition of bleacher seating behind one end zone.

This will be Sun Valley’s third appearance in the Classic and a rematch with Christian after both teams appeared in the first game back in 2013.

In that game, Austin Kendall, then a sophomore at Christian, was the quarterback and in the backfield for Sun Valley was Albert Funderburke, who was on his way to becoming Union County’s all-time leading rusher. Sun Valley fell in that game, 28-19.

In 2014, Sun Valley returned to the Classic to play Hough. The Spartans lost that opener, 34-20 in Tad Baucom’s first year as head coach of the Spartans.

I found it interesting that Sun Valley returns to the game after five years without the presence of their number one signal-caller and the county’s greatest quarterback, Sam Howell who is now competing for the starting QB position at UNC.

I mean Sun Valley plays in the first two years of the Kickoff Classic and not once during the Howell-era?

I joked about this with Coach Baucom after the press conference. Let’s say I don’t think the football coach found the coincidence as amusing as I.

Regardless, Baucom knows the impact of playing the first game in the state and looks forward to opening the 2019 campaign against Charlotte Christian, one of the elite football programs in North Carolina.